X
Back to the top
X

Be the first to hear about new arrivals, exclusive discounts, and the latest news. 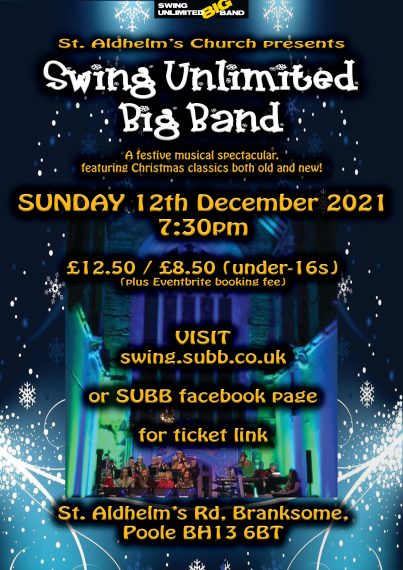 A truly magical evening. A concert filled with Christmas classics and songs – some performed in a traditional style, some re-imagined, all with that stunning big band sound.

Swing Unlimited were formed in 2001 in Bournemouth, and have been performing sell-out shows all across the region ever since. All styles are covered, from classic big band swing, through pop and rock, to classical music and epic movie themes.

SUBB’s Christmas concerts at Highcliffe Castle have been selling out multiple nights for many years. This is the first time the band have taken the show ‘on the road’ and they are delighted to partner up with St. Aldhelm’s to bring their exciting show to a new audience.

Musical Director, James Stead, is well-known to St. Aldhelm’s audiences, having been involved with concerts at the church for over twenty years, with both Big Little and BMT Productions.

SUBBscribe to our newsletter to get the important news before anyone else.